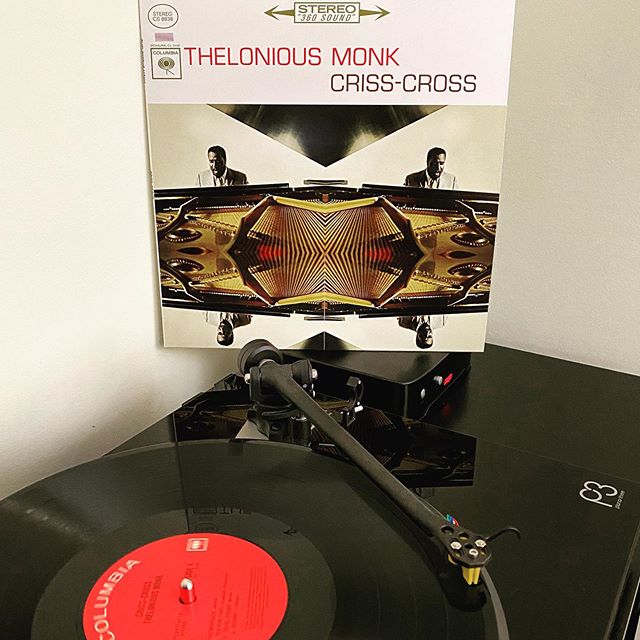 Much has been written about Monk’s 40s/50s Blue Note/Prestige/Riverside recordings vs his 60s Columbia recordings. Generally, opinions look more favorably upon his earlier work. This is understandable, as Monk’s groundbreaking compositions of that era made him one of the most-recorded jazz composers, ever. But many of those 50s records could also be enigmatic if not downright baffling to get one’s head around, particularly if new to the music of Monk. So while Monk’s LPs for Columbia don’t have as quite much to offer in terms of new compositions, you can’t beat them for the excellence of the performances, and the togetherness of his band (both ‘Criss-Cross’ and ‘Monk’s Dream’ feature one of Monk’s most stable, long-term quartets that include Charlie Rouse-tenor sax, John Ore-bass, and Frankie Dunlop-drums). If anything, the tight playing of this particular small combo underscores the brilliance of the compositions. The quirkiness of Monk’s approach to songwriting, and his often idiosyncratic delivery don’t make for good background music regardless of label or era, but *IF* there is such a thing as a “feel good” Monk record, this is probably it. I’m still not sure I’d call it happy music, but ‘Criss-Cross’ is overall rather upbeat in tone, largely due to how confident both Monk and the rest of the quartet sound throughout. The program is split between several classic Monk tunes, and a couple of standards. A fine record—a recommended “starter” Monk record for newbies, but there’s plenty to sink your teeth into here even if you’re a self-proclaimed Monk Blue Note/Prestige/Riverside snob! Personally, I love this record and consider ‘Criss-Cross’ an essential Monk album.