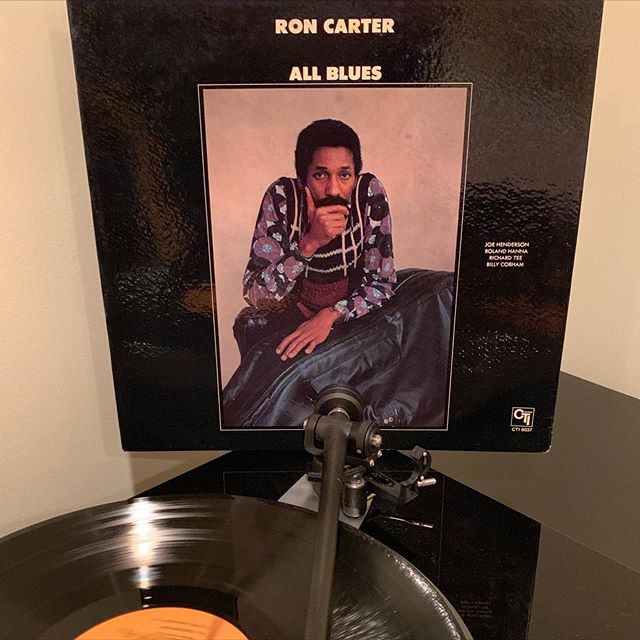 I don’t know Mr. Carter personally, but from what I know *OF* him, he’d probably cringe if I used the expression “living legend,” so I’m not going to do that, even though he deserves it. I will wish him a happy 83rd birthday and many happy returns of the day. I could have shown any number of his records in celebration– after all, he’s the most recorded bassist in jazz history, having played on over 2,200 sessions. He’s also a multiple Grammy winner, a multi-decade professor with a strong dedication to music education at various universities, an actor, composer, and author. I spun this LP earlier and enjoyed the title track in particular. Carter’s approach is so confident, and you can’t help but feel that he knows EXACTLY what he’s doing and that even if the situation changes, he’ll roll with Plan B, turning on a dime in an equally confident, relaxed, steady manner. This “Tao of Ron Carter” actually seems like a pretty good approach to life in general!
It’s hard to pick a favorite Ron Carter moment amongst so much great music, though I often turn to this ‘All Blues’ record (CTI 1973), his work on Andrew Hill’s ‘Passing Ships,’ the track “Basin Street Blues” from ‘Seven Steps to Heaven,’ and of course his famous bass line on “Footprints” from ‘Miles Smiles’. “Footprints” in particular gets me every time, as he and drummer Tony Williams toss 12/8 and 4/4 time back and forth with both muscle and magic. I never tire of listening to it, and though I’m not a bass player, I understand why bassists have been studying it—and arguing over exactly what he’s actually playing/doing—for over five decades. It’s amazing.
More power to you, Ron