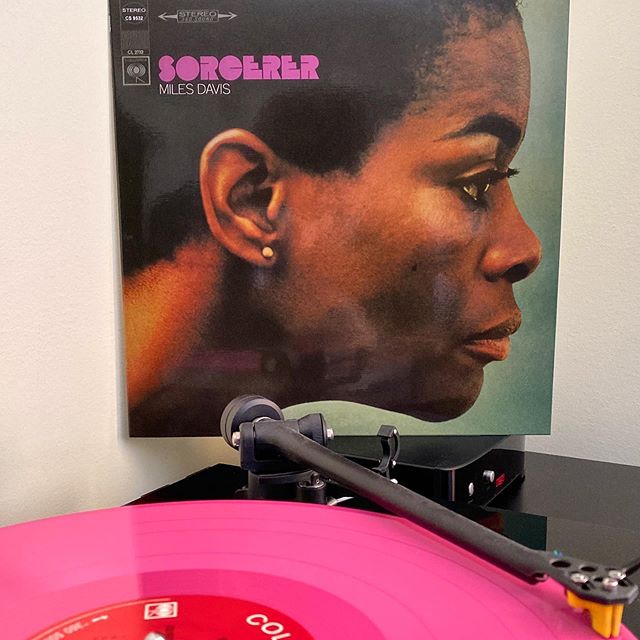 Happy 94th birthday to the Prince of Darkness, Miles Davis! It wasn’t hard to pick an album for today’s post—‘Sorcerer’ has been in heavy rotation for the last couple of weeks. My deep appreciation (bordering on obsession) with the Second Great Quintet is no secret, and each of the six albums they released between 1965–1968 is a gift that keeps on giving. ‘Sorcerer’ from 1967 is a middle child and one that some of my jazz pals rank slightly lower than the others. As everyone is entitled to their opinion, *MY* belief is that those pals should pull the cotton out of their ears, open their minds, and listen again. They view the lack of compositions from Miles and the perception that “he doesn’t play enough” on ‘Sorcerer’ as a reason to criticize. Opinions vary—I see this as one of the most significant examples of Miles’ drive towards “letting go” and making this a team effort. After all, hiring a band half his age as a catalyst towards pushing himself to be better was one of his core strategies, and there’s a lesson in that for us all. Besides, how do you argue with the nocturnal, brooding “Prince of Darkness,” which worms its way into your soul like a spirit that’s equally sinister and benevolent? How does one not sit in awe of the mighty “Masqualero,” a sprawling composition of enigmatic, interlocking complexity that remained a part of Miles’ live book for years? Plus, I just love the note in “Masqualero” at around 4:21 that Wayne Shorter coaxes into existence—you can hear him putting the breath of life into it with such thought and deliberation, and it’s just, exactly, perfect. It’s one of my favorite moments in jazz. In textbook Second Great Quintet fashion, the group excels at defying rhythmic conventions, but the pulse throughout is healthy if you’re willing to invest the time in finding it. Pulse leads to the heartbeat, and that’s ultimately where this and all of Miles’ music is rooted—in the heart. The cerebral “music as contact sport” fun of the Second Great Quintet is one reason I love listening to it so much, but equally important is how often this music gives me the feels. Mad respect and appreciation to birthday boy @milesdavis today